By interpreting depositional sequences in the seismic and well log data separately, discontinuities are identified as objectively as possible on the seismic and log sections before they are tied together using the synthetic seismogram.[1] 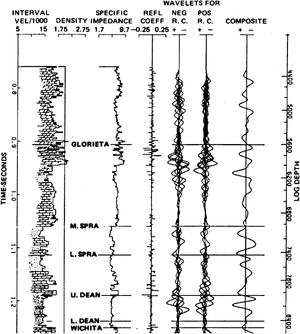 Figure 1 example of a synthetic seismogram from the Midland basin, Texas.[1]

After well logs and seismic sections have been analyzed for sequences, well log and seismic interpretations should be tied together by generating a synthetic seismogram from log information. There are two primary objectives to this step:[1]

Figure 1 is an example of a synthetic seismogram from the Midland basin, Texas. 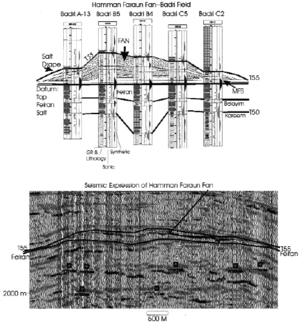 Synthetic seismograms, or synthetics, can be interactively tied to log, lithologic, and seismic data on geological workstations. Figure 2 illustrates an example from the Gulf of Suez basin. A wavelet trough forms at a sequence boundary (T55) overlain and sealed by anhydrite and salt. A pronounced wavelet peak forms on an underlying maximum flooding surface. The intervening sequence consists of a lobate deltaic fan formed during a relative highstand. The transgressive systems tract is thin to absent. The geometry of the fan is clear from the well log and seismic integration.