Besides unconformities, other surfaces and stratigraphic features are useful for correlation. Unconformities serve as boundaries for first-, second-, and third-order sequences. Other correlation features—maximum flooding surfaces, condensed sections, transgressive surfaces, and downlap surfaces—subdivide the third-order sequences into systems tracts and parasequences.

A maximum flooding surface separates “younger from older strata across which there is an abrupt increase in water depth. This deepening is commonly accompanied by minor submarine erosion or nondeposition, but not by subaerial erosion due to stream rejuvenation or basinward shift in facies”.[1] Submarine erosion ranges from inches to tens of feet, with several feet being common.

A condensed section is “a facies consisting of thin hemipelagic or pelagic sediments deposited as the parasequences step landward and as the shelf is starved of terrigenous sediment”.[1] They are most extensive during times of regional shoreline transgressions. Condensed sections contain the greatest abundance and diversity of fauna within a third-order sequence. The section is thin because it accumulates at very slow rates. 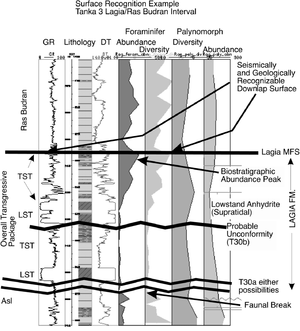 A downlap surface (DLS) is a marine flooding surface onto which the toes of prograding clinoforms of the overlying highstand systems tract downlap. The surface represents a change from a retrogradational depositional pattern to an aggradational pattern. It is the surface of maximum flooding, recognized by downlap of overlying units and apparent truncation of underlying units. A downlap surface is common at the base of prograding deltas and the top of submarine fans.

The computer-generated labels on the right side post alternative sequence boundary picks. In this way the interpreter can choose the best pick from all available well and seismic information.