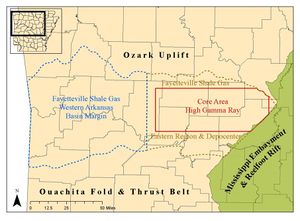 Figure 1 Primary area of the Fayetteville Shale exploration and development in Arkansas. 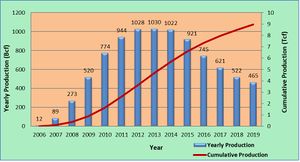 The U.S. Energy Information Administration (EIA) reported in 2013 that the Fayetteville Shale contained 31.96 Tcf of technically recoverable gas resource, of which 27.32 Tcf was attributable to the core producing area (eastern area) and 4.64 Tcf for the remainder of the producing area (western area). A study by the Bureau of Economic Geology at the University of Texas at Austin found the play holds 38 Tcf in technically recoverable resources, of which a cumulative 18.2 Tcf are economically recoverable reserves by 2050. EIA also reported that the proven gas reserves of the Fayetteville Shale in 2017 were 7.1 Tcf, an increase over the 2016 estimate of 6.3 Tcf. 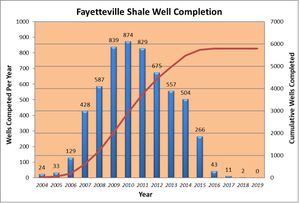 Due to a decline in drilling activity driven by lower natural gas prices, Fayetteville Shale gas production has decreased since peaking in 2013. In 2019, approximately 465 Bcf of gas was produced in the play, a 11% decline over the last year. Estimated cumulative production of gas as of 2019 has totaled 8.95 Tcf (Figure 2). Initial production rates of horizontal wells in 2017 averaged about 5.3 MMcf/day. For more Fayetteville Shale information, please refer to the Arkansas Oil and Gas Commission’s web link at http://www.aogc.state.ar.us/sales/default.aspx.

In the entire year of 2019, no rigs worked in the Fayetteville Shale gas play (Figure 3), demonstrating a rapid downward trend in well completion since 2015 (Figure 4). Approximately 39 gas wells were plugged and abandoned.

The Arkansas Geological Survey (AGS) has completed two extensive geochemical research projects on the Fayetteville Shale and has provided this information to the oil and gas industry and the public to assist with exploration and development projects. The results of these studies were published by the AGS as Information Circular 37 (Ratchford et al.[1]) and Information Circular 40 (Li et al.[2]), which integrated surface and subsurface geologic information with organic geochemistry and thermal maturity data.