The pores and fluids of a reservoir system interact during the processes of expulsion, migration, accumulation, and flow to a wellbore. Differential pressure (ΔP) in the fluid continuum of the petroleum system, caused by properties of fluids and pores, controls these processes.

Expulsion describes the movement of hydrocarbons from the petroleum source rock into the carrier bed or migration conduit. The expulsion event is driven by a combination of factors that include compaction, chemical reactions, source richness, kerogen type, and thermal expansion. Hydrocarbon generation causes pressure build-up in the source rock, exceeding the pore pressure of the adjacent carrier bed. Oil or gas is expelled or “squeezed” into the carrier bed due to the differential pressures between source rock and fluid in the carrier bed.

Figure 1 Relationship between the buoyancy pressure (Pb) and the capillary resistance of the water. After Berg.[1]

Hydrocarbon migrates through an aquifer when it is “buoyed” upward due to AP caused by the density differential of the hydrocarbons and the formation water. The oil or gas migrates in filaments through the pore system of the aquifer as long as the buoyancy pressure (Pb) exceeds the capillary resistance of the water in the pore throats. This relationship is illustrated in Figure 1.

For migration to continue as pore throat size decreases from one site to the next (points A and B in Figure 1), the length of the filament (h) must increase until an adequate Pb exists across the pore throat to initiate breakthrough. 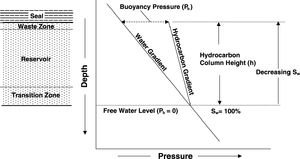 When a reservoir has formed in a trap and has come to pressure equilibrium with the water in the aquifer, the pore pressure of the hydrocarbons at different depths in the reservoir plot along a steeper gradient than the water gradient. Figure 2 shows this relationship.

The pressure contrast between the hydrocarbon gradient and the water gradient at a given depth in the reservoir (height above free water) is the buoyancy pressure (Pb). The longer the column, the higher the Pb at the top of the column.

The water remaining on the surfaces of the pores and pore throats of a rock after hydrocarbon has driven (drained) out the rest of the water is called the residual water saturation (Swr). Pb provides the energy needed to overcome the capillary resistance of the water in the pore throat and drive down Swr in the pore. The higher a portion of the reservoir (with a given capillary pressure profile-pore type) occurs above the zero (0 psi0 kPa
0 MPa
0 atm) Pb position, the lower its Swr will become. Consequently, an Swr model can be developed from capillary pressure profiles because Swr is a function of the profile of pore throat sizes and height above Pb = 0 psi0 kPa
0 MPa
0 atm.