Capillary pressure concepts can be used by geologists, petrophysicists, and petroleum engineers to evaluate the following:

Evaluating capillary pressure of potential reservoir and seal rocks is important because capillarity controls the static distribution of fluids in the reservoir prior to production and remaining hydrocarbons after primary production. 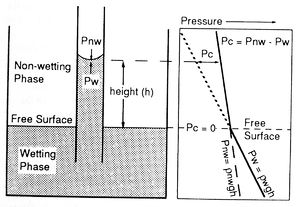 Figure 2 The wetting phase rises above the original or free surface in the capillary tube experiment until adhesive and gravitational forces balance. Capillary pressure (Pc) is the difference in pressure measured across the interface in the capillary (Pc = Pnw - Pw). This pressure results from the contrast in pressure gradients caused by the different densities of the nonwetting (ρnw) and wetting (ρw) phases (right).

These equations show that capillary pressure increases with greater height above the free surface and with smaller capillary size.

The importance of capillary pressure in reservoir studies is that many reservoir rocks can be approximated by a bundle of capillaries, with formation water being the wetting phase and hydrocarbons the nonwetting phase. As hydrocarbons begin to migrate into a rock, displacing the pore water, the hydrocarbons first enter the pores with the largest pore throats (capillaries), leaving the wetting phase (water) in the pores with smaller throats or in small nooks and crannies (surface roughness). As the hydrocarbon column increases, the height above the surface where Pc = 0, called the free surface or free water level (FWLfeet from west line), becomes greater and the capillary pressure increases, allowing hydrocarbons to enter pores with smaller and smaller throats. This process continues until one of several things occurs:

Reservoir capillary pressure relationships can be evaluated by using either of the following: 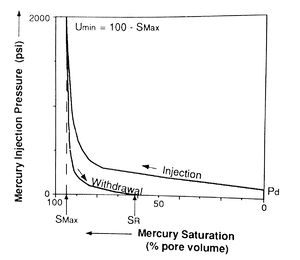 Mercury injection capillary pressure data are acquired by injecting mercury into an evacuated, cleaned, and extracted core plug. Mercury injection pressure is increased in a stepwise manner, and the percentage of rock pore volume saturated by mercury at each step is recorded after allowing sufficient time for equilibrium to be reached. The pressure is then plotted against the mercury saturation (Figure 3), resulting in the injection curve (which is also called the drainage curve because the wetting phase is being drained from the sample).

The pressure at which mercury first enters the sample (after the mercury has filled any surface irregularities on the sample) is termed the displacement pressure (Pd). The percentage of pore volume saturated by mercury at the maximum pressure is the maximum saturation (Smax). The unsaturated pore volume at that pressure is the minimum unsaturated pore volume (umin) (Figure 3). This is sometimes incorrectly referred to as irreducible saturation. This term is inappropriate for the air-mercury system because saturation depends on applied pressure and on the duration of the experiment.[1]

Data from the mercury injection curve can be used to approximate the distribution of pore volume accessible by throats of given effective radii (in cm) using the following equation: 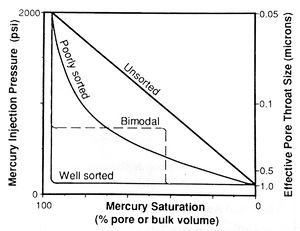 Figure 4 Idealized mercury injection capillary pressure curve shapes. Note that all of the curves have identical displacement pressures and minimum unsaturated pore volumes, but that the saturation profiles would differ dramatically due to differences in pore throat size distributions.

Note that this equation calculates the radius of a cylindrical capillary tube; however, real pore throats have very complex geometries. Therefore, the calculated values represent the effective radii of the pore throats, which may not equal their actual dimensions. Samples dominated by throats of similar size (well sorted) have broad, flat plateaus (Figure 4). As [[Core_description#Maturity|sorting] becomes poorer, the plateau steepens then disappears and the slope of the curve approaches 45° (unsorted).

Data from the mercury withdrawal (air imbibition) curve can provide information regarding the efficiency with which the nonwetting phase can be withdrawn from the pore system. Withdrawal efficiency (WE) is defined as the ratio of the mercury saturation in the sample at minimum pressure after pressure is reduced (SR) to the saturation at maximum pressure (Smax) (Figure 3).[1] Because few samples reach 100% mercury saturation at routinely available injection pressures, data are normalized by the following equation:

Before mercury injection data can be applied to reservoirs, the data must be converted from the air-mercury system to the brine-hydrocarbon system of the reservoir using the following relationship:

Ideally, values for brine-hydrocarbon contact angle, surface tension, and fluid densities at reservoir temperature and pressure should be determined in the laboratory using actual reservoir fluids. However, these measurements are difficult and expensive, so approximations such as those given in Tables 2 and 3 are commonly used.

* Contact angle is measured on a quartz plane during drainage

Height above the free water level 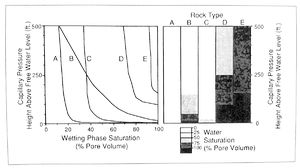 Figure 5 Effect of capillary pressure (left) on water saturation (right). At any given height above the free water level, water saturations vary widely among rock types (A-E) due to diffferences in capillarity. For example, at 50 ft above free water level, water saturations vary from 18% (rock type A) to 95% (rock type E). A well drilled into an interbedded sequence of these rock types would show multiple oil-water contacts and a highly irregular vertical saturation profile. Note also the wide transition zone in rock type B caused by poor sorting of the pore throats.

Having converted the capillary pressure data to the hydrocarbon-brine system of the reservoir and knowing the hydrocarbon and brine densities from laboratory analysis, we can now calculate the amount of hydrocarbon column required (height above the free water level or level where Pc = 0) to attain a pressure of interest:

This information can be used to compare expected fluid saturations of different rock types at given levels in the reservoir (Figure 5). (For information on the application of capillary pressure data to evaluating fluid contacts.

If the capillary pressure data from the suspected seal are available or can be estimated, the maximum hydrocarbon column each rock type could have before the seal begins leaking can be calculated by the following:

It is difficult to determine the displacement pressure (Pd) of a top seal.

These tortuous pathways develop even in bead packs of uniform, closely packed glass spheres. Natural seals are even more heterogeneous.

The difficulty of defining these narrow zones during sampling complicates our ability to predict the critical displacement pressure of a seal. Although 99% of the samples from a trap may indicate a top seal capable of trapping a 500-m oil column, the seal may well leak through a narrow pathway only centimeters in diameter.

Another type of mercury test involves injecting mercury to a saturation less than the maximum, withdrawing the mercury to some residual wetting phase saturation, and then reinjecting the mercury. This process, repeated several times to progressively higher maximum pressures, produces hysteresis loops. These loops, wherein mercury is partially withdrawn and then reinjected, can be used to investigate withdrawal efficiency at various initial saturations.[6] [7] [1] [2] [8] Results suggest that the higher the initial saturation of the nonwetting phase, the greater the withdrawal efficiency. Porosimetry uses hysteresis loops to interpret pore body and pore throat size distributions and their partial arrangement.[9] [8] Pore sizes have also been evaluated with rate-controlled mercury injection.[10]

It should be noted that although these more specialized procedures are quite informative, especially for approximating hydrocarbon recovery efficiencies, they are also relatively labor intensive and expensive when compared to routine mercury injection tests.