Why kro or krg is less than kab 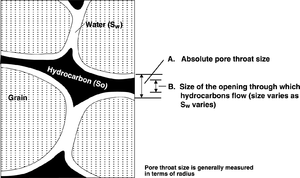 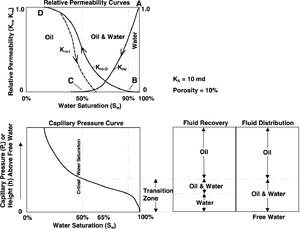 Figure 2 is an example of “drainage” relative permeability of a water-wet reservoir. It shows changes in Kro and Krw as Sw decreases, as in a water-drive reservoir during hydrocarbon fill-up. “Imbibition” Kro and Krw have a different aspect, being measured while Sw increases, as it does during production in a reservoir with a water drive.

The drainage curve determines from computed Sw whether a zone is representative of lower transitional (Krw> Kro - D), upper transitional (Krwro - D), or free oil (Krw ≈ 0). The imbibition curve relates to performance due to filtrate invasion from water injection or flushing from natural water drive. 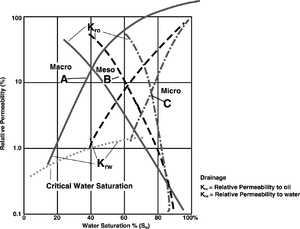 Critical Sw is the point where water saturation is so low that no significant water cut can be measured; only hydrocarbon flows from the reservoir. At Sw higher than critical Sw, water flows with hydrocarbon. Where Sw becomes great enough, only water flows.

The table below summarizes representative critical Sw values for macro-, meso-, and micropore types that correspond to A, B, and C, respectively, in Figure 3.