Completions can be divided into three categories: open hole completions, liner completions, and perforated casing completions. In most wells, conventional single perforated casing completions are used; however, multiple, alternate, or slim hole completions may be used under certain conditions. The choice of completion type should be closely coordinated with the development of the reservoir management plan. For example, the size, weight, and grade of the tubular goods will be determined based upon the ultimate use of a wellbore. An injection well may require stronger casing than a production well. 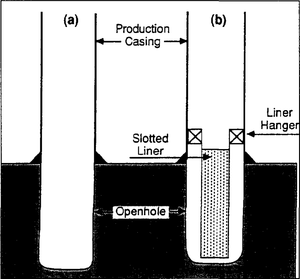 Figure 1. Wellbore diagram of (a) an open hole completion and (b) a slotted liner completion.

One important disadvantage of an openhole completion is that production casing must be set prior to drilling and logging the reservoir. If for some geological or engineering reason the target formation is not productive, then money has been spent to set casing in a well that may be plugged as a dry hole. Another disadvantage is the lack of control that occurs when an open hole completion is made. One cannot control the flow of fluids from the reservoir into the wellbore nor the injection profile in an open hole completion. In addition, if the formation is not competent, sloughing zones can cave into the wellbore and restrict flow to the surface. 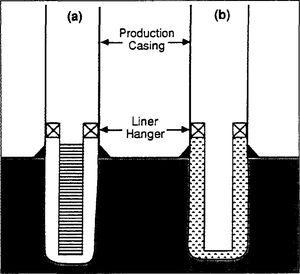 The cemented liner completion is used when intermediate casing is set in a well prior to reaching total depth (Figure 2b). Many times intermediate casing is used to isolate zones behind pipe such as low pressured intervals that tend to cause lost circulation problems or to isolate zones such as sloughing shales or salt layers. Intermediate casing is also set in transition zones between normally pressured intervals and geopressured intervals. After the casing is set, the weight or chemistry of the drilling fluid can be changed to continue drilling the well. The cemented liner completion is advantageous because the particular intervals behind the liner can be selectively perforated. This selection will allow one to control both the production and injection of fluids in those intervals. he main disadvantage of a cemented liner is the difficulty encountered in obtaining a good primary cement job across the liner. If a good cement job is obtained, then a cemented liner completion is very similar to a perforated casing completion. 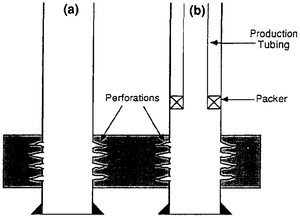 The more complex the completion, the more trouble one can expect in both completion operations and in subsequent workover operations. Multiple completions should be considered only in special situations. These situations include areas where drilling costs are very high or where the area allocated for drilling wells is at a premium. Such areas include offshore areas, highly populated areas, and remote land locations. 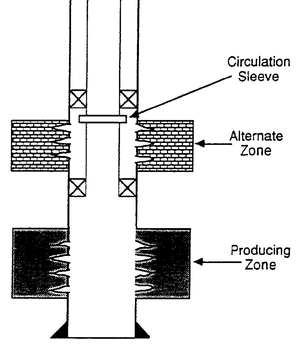 In certain reservoirs, the economic value of the reserves does not justify the expenditures of normal completion methods. An example of such a reservoir would be a series of thin, small lenticular dry gas intervals. Under certain conditions, the reservoir might not warrant the use of large production casing and tubing to produce the gas. For such reservoirs, slim hole completion techniques might be justified in which small pipe, such as 4-1/2-in. or 2-7/8-in. casing, is run and cemented in the wellbore. This small casing serves as the tubing and casing for the wellbore. This completion practice is used to minimize completion costs and should be used only for wells that are expected to have short producing lives and that do not require artificial lift.

The completion technique applied to a well depends on whether the well is a producing well or an injection well. For a producing well, the number of different reservoirs that may eventually be produced is significant. A decision must be made on whether a single or multiple completion will be made. One should be aware of stimulation treatments that may be required or the possible need for artificial lift equipment to produce fluids from the wellbore. Information on Christmas trees, [[[tubing spool]]s, packers, and downhole equipment needed to produce the well should be carefully designed and included in the completion program.

If a well is to be an injection well, one should be aware of the intervals that will require completion for the injection of fluids. The engineer should have an idea of the anticipated injection rates and pressure that will influence the design of the completion program. Extra effort should be made to ensure that the casing, tubing, wellhead, and cement programs are carefully designed and that the mechanical condition of the well during completion is excellent.