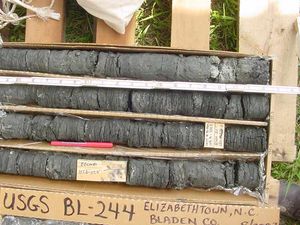 Retrieval and analysis of cores is essential to all phases of the petroleum industry. Cores offer the only opportunity to obtain intact, vertically continuous samples that allow the visual examination of depositional sequences and variations in reservoir character. Properly analyzed cores provide data available from no other source; these data should provide direct evidence of the presence, quantity, distribution, and deliverability of hydrocarbons. Cores are essential to understanding the nature of the pore system in the potential reservoir unit. The knowledge gained from cores enhances our ability to predict reservoir performance and to select procedures to maximize profitable hydrocarbon recovery.

An alternative to continuous coring is the retrieval of discrete samples from the wellbore face known as sidewall cores. These samples can provide useful details of the lithology, petrology, porosity, permeability, and hydrocarbon content of the formation.[4] The analytical results can be used to verify log analysis calculations. Selection of sidewall core points after logging allows selective sampling of specific zones.[5] (See also Sidewall coring.)

A number of generally accepted sampling and analytical techniques have been developed for evaluating core samples. The choice of technique depends on the type of core recovered, its lithology, and the nature of the pore system. Core analysis can be divided into several different types: (1) conventional or plug analysis, (2) whole core analysis, and (3) sidewall core analysis.[6]

Continuous cores can be analyzed by conventional or whole core procedures, but conventional core analysis is most frequently used.[5] This procedure employs a small sample to represent an interval of core and produces acceptable results when the pore system is relatively homogeneous. Conventional core analysis plugs are usually collected once per foot or three to four times per meter.[7] Variations in pore system development or lithology require more frequent sampling. Sample density should be adequate to define net pay, hydrocarbon-water transition zones, contact levels, and formation boundaries. Sampling can be done statistically at the mid-point of each foot or the most representative sample in each foot can be selected.

Whole core analysis examines the complete length of full-diameter core in the interval being tested and affords the maximum possible sample size. Large samples are mandatory in heterogeneous formations in which most of the porosity and permeability are due to fractures, solution vugs, or erratically developed pore systems. In these cases, the volume of individual pore spaces may be large in relation to the size of conventional core analysis plug samples.[6] A variation of whole core analysis, called full-diameter analysis, utilizes selected lengths of a core rather than the entire core.

Sidewall core analysis is performed on cores recovered by any of the sidewall coring techniques.

Percussion sidewall cores from hard, well-cemented formations are badly altered during the coring process and generally fail to produce suitable measurements of mechanical and petrophysical properties.[5] Sample alteration may be reduced through the use of sidewall boring or a hydraulic press to collect sidewall core samples.[4]

Sidewall coring and analysis produce acceptable results when suitable formations, such as the soft Miocene and Oligocene sandstones found in Gulf Coast and California reservoirs, are sampled in adequate detail. Data quality in wells where only sidewall cores are available can be improved by developing correlations between conventional and sidewall core values. This requires that conventional cores and sidewall cores be collected from the same interval in selected wells.[5]

Analytical procedures vary slightly with sample type. For conventional core plugs and sidewall cores, gas volume is determined by mercury injection. Oil and water volumes are determined by high temperature distillation. Sidewall core measurements are all carried out on one sample. In conventional core analysis, gas volume is determined on one sample while oil and water volumes are measured on a second sample. Significant variations in pore system quality between samples can cause errors in fluid saturation and porosity values.[7]

Gas volume of whole core samples is determined by evacuating the sample and resaturating with water while measuring the weight of water absorbed. With vuggy samples, water injected to refill the gas volume may drain from the surface vugs causing errors in the measured gas saturation.[9] The oil and water volumes are determined by retorting the core under vacuum. The recovered water volume corresponds to the sum of the pore water and the gas volumes. Low API gravity oils are only partly recovered by this process, thus recovered oil volume may be low.[9] (For more on determining porosity from core samples, see Porosity.)

At depth, reservoir rock contains some combination of liquid and gaseous hydrocarbons and water. The exact fluids present and their relative abundance depends on the type of reservoir (gas, condensate, or oil) and the degree to which it is charged. The fluid distribution at or near the surface is quite different from that under reservoir conditions. These changes are due to drilling processes, gas expansion, and handling errors.[10][5]

In samples having a porosity greater than 30%, sidewall core porosity is 1 to 2% lower than conventional analysis porosity. This results from slight compaction that occurs during coring. Medium and low porosity percussion sidewall samples, especially from highly cemented rocks, display porosity that is much too high due to fracturing and grain shattering. The deviation between measured porosity and true porosity becomes greater as the actual porosity decreases. Uncertainty caused by systematic variation in sidewall core porosity relative to plug analysis values can be minimized by development of correlations between sidewall core and conventional core values.[5] (For more on porosity, see Porosity.) 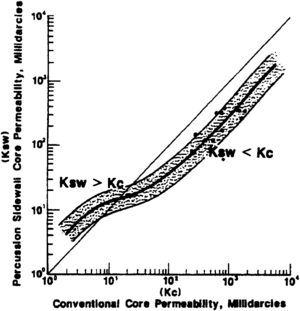 Whole core samples may contain vugs and fractures that are excluded from core analysis plugs and thus often yield higher permeabilities. To offset this effect, especially in fractured samples, whole core permeability is measured in two horizontal directions. One measurement (reported as k or kmax) is made parallel to the major fracture planes and reflects the influence of the fractures as flow pathways. The second measurement is made perpendicular to the first. This value, reported as k90, reflects matrix permeability and is close to conventional core analysis permeability.[8]

Whole core permeability can be reduced by as much as 50 to 80% by the invasion of drilling mud solids into the pore system or the build-up of powdered rock on the core surface. The relative reduction in permeability appears to decrease as the actual value decreases. Whole core samples may require sand blasting prior to permeability measurement to deal with the surficial buildup of powdered rock. No method is available to address the permeability reduction caused by drilling mud fines that have penetrated the pore system. These fines may cause whole core permeability to be significantly lower than conventional permeability. Plug samples from the center of the core do not suffer from surface plugging, and the effects of drilling fines invasion is minimized.[9]