Pore throats act as molecular sieves, allowing particles smaller than the orifice to pass and retaining larger particles. If seals were uniformly composed of the same pore throats, they would be perfect seals for compounds larger than the pore throat apertures. 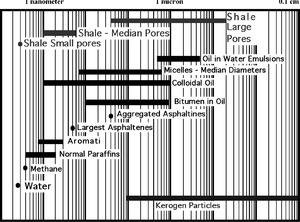 Transport of larger molecules, while possible through the large shale pores, becomes increasingly less likely as the path traversed through shale lengthens. This is due to the increased probability of a continuous large pore network terminating into a small pore throat. Indeed, even the flow of the comparatively small water molecule often requires significant pressure gradients to overcome the restrictions to flow common in shales. For water, the problem is generally not one of ability to pass but rather one of rate of passage.

Permeability is related to pore throat size, distribution, and interconnectedness. It is a measurement of the rate at which fluids move through a pore system. The properties of the fluids present in the pores also control the rate at which they move through the system. Permeability is inversely related to the viscosity of the fluid moving through the pores. The presence of more than one immiscible phase in the pore system reduces the permeability of each phase below what it would be if it were the only phase present. Permeability measurements are dominantly taken in sands for reservoir engineering purposes and rarely in shales because of difficulties in getting good measurements. Also, permeabilities derived from cores are characteristically lower than those measured during production tests.

Once a separate phase is formed, capillary forces become effective. Capillary forces arise at the interface between two phases across a restricted opening. Capillary pressure is a function of the interfacial tension between the immiscible fluids and the pore throat size. As the pressure difference across a capillary restriction increases, the interface deforms and eventually the nonwetting phase penetrates the restriction. Capillary effects only arise at the contact of two immiscible phases. Neither solution transport nor continuous phase is affected by capillary effects. The phase that preferentially wets the grain surfaces (usually water) is continuous. The nonwetting phase is generally assumed to form one or more continuous networks through a bed when its concentration exceeds between 4.5% and 17% of the pore volume.

For small pores [100 nanometers (nm) or less] and small pore throats (10 nm or less), the concept of surface tension becomes ambiguous. A spherical pore of 100 nm diameter has a pore volume of 5 × 10–16 cm3. The solubility of methane in water is on the order of 1 g/100 g of water. Therefore 150,000 molecules of methane may be dissolved in the pore water and any excess will be in a free phase. As a bubble of methane deforms to pass through the pore throat, about 75 gas molecules are in the pore throat water. It is unclear what the surface tension of the water is with this number of gas molecules or whether the concept of surface tension is valid for these conditions at all. Due to the decrease in solubility with increasing molecular weight and the increase in molecular size, these questions are even more applicable to the other hydrocarbon species and for smaller pores because the number of molecules in pore and pore throat is even less.

Differences in pore fluid overpressure determine the potential, general direction, and rate of fluid flow. For hydrocarbons, the force of buoyancy must be added. The spatial distribution of pressure differentials interacts with permeability and capillarity to determine the flow rates along multiple migration pathways. Perfect seals—ones that don't leak at all—rarely occur. Pressure minimums are a perfect seal. When all the forces acting on a hydrocarbon mass are resolved and a local minimum in gradient field occurs, the hydrocarbons will remain in the minimum as long as it exists. There is no migration out of that minimum.

Hydrocarbons can be preferentially sorbed on (wet) mineral surfaces. Sorption can control the rate of transporting different hydrocarbon compounds, acting as a chromatographic column. Sorption of saturated gasoline-range hydrocarbons is greatest for the higher boiling, larger molecules. Aromatic hydrocarbons show a similar relationship but are sorbed to a greater extent. A sorption threshold may need to be exceeded before hydrocarbons can migrate from the source rock. Sorption by kerogen is dominant over that of mineral phases.