Full waveform acoustic logging tools are similar to conventional acoustic logging tools. The main differences are that (1) the source is usually of lower frequency, centered at 5 to 10 kHz rather than at 20 kHZ; (2) the source-receiver spacing is longer, on the order of 10 ft3.048 m
120 in (3.05 m); and (3) the receiver is commonly an array consisting of four to twelve phones.

The source generates a pressure pulse. Seismic waves propagating down the borehole are recorded by the receivers. Instead of just the first arrival, the whole wavetrain traveling down the borehole is recorded and digitized, with the typical digitization interval being 5 μsec. The length of the time window recorded varies from 2 to 10 msec, depending on the source-receiver separations.[1] 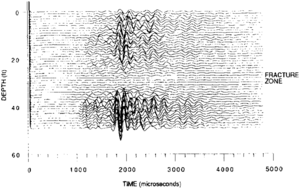 With some FWAL tools, the slowness (inverse velocity or time needed to travel a fixed distance) is obtained the same way as in conventional sonic tools by picking the P wave arrival using a threshold detection algorithm and measuring the moveout between two receivers.[4] Because of the lower frequency content, this method is not as accurate as that used with conventional sonic tools. The newer generation of FWAL tools take advantage of the larger number of receivers. Several different array processing techniques are used, the most common being semblance stacking along different slownesses.[5] [6] [7] This method can also be used to obtain the slownesses of the later arrivals, namely, the S wave and the Stoneley wave. 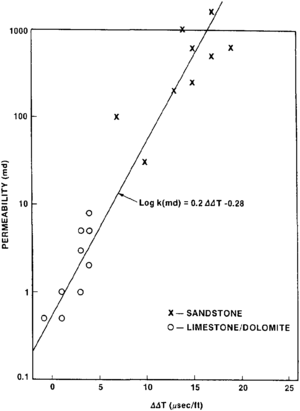 Figure 3 Plot of the difference between the measured slowness and the predicted elastic slowness (ΔΔT) against the core measured permeability values for both the limestone-dolomite and the sand-shale examples. (After Burns et al.[10])

The most direct use of FWAL is the measurement of formation shear wave velocity. Together with P wave velocity and density, one can obtain the shear modulus and compressibility of the formation, which are very important in engineering applications. P wave to S wave velocity ratio is a good indicator for lithology, and borehole S wave velocity information is necessary for tie-in with shear wave reflection profiles, amplitude versus offset studies, and elastic wave equation migrations, among many other uses.

The FWAL is also commonly used to identify and characterize fractures. Fractures are easily identified by a significant attenuation in all the wave modes—P, S, and Stoneley. An example of data across a fracture zone is shown in Figure 2. Various models are available to estimate the permeability of the fracture from the Stoneley wave attenuation across a fracture[11] [12] and reflection from a fracture.[13]

Similar to fractures, the FWAL can also be used to identify and characterize permeable zones.[9] [10] Stoneley wave velocity decreases and attenuation increases with formation permeability. These changes can be attributed to the interaction between the pore fluid and borehole fluid.[14] A correlation between core measured permeability and change in Stoneley wave slowness for two different formations is shown in Figure 3.